Paash: An Iron Tale
Celebrating the 56th birthday of a poet


In the spring of 1967, peasants of Naxalbari--a sleepy village of West Bengal, India--came out of their fields with traditional weapons to fight the establishment. They fought heroically but the moderately armed security forces suppressed them brutally, for a few years.

Even though it was supressed it made a significant contribution to the field of literature and gave birth to new paradigms, which were path breaking in practice and pro-people in nature. It redefined the relationship of student and education, artist and society, country and city, state and people, repression and resistance, violence and peace.

The influence of the Naxalite movement reached the farthest corners of the country. In Punjab, Paash--pen name of Avtar Singh Sandhu--was deeply influenced by this movement. He was one of those who had from the very beginning expressed their uneasiness over the prevailing discourse of romantic poetry in Punjab. 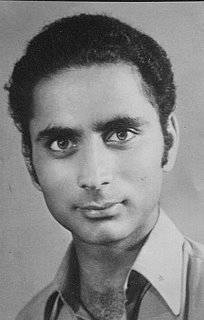 He was not even twenty when he first came to light with his anthology of poetry "Loh Katha" (The Iron Tale) in 1970. This anthology was a complete breakaway from romantic poetry.

Initially many "established poets" refused to recognize the "young lad." They termed his poetry a mere "rag of red cloth." But Paash was altogether different from his contemporaries, he never felt the need for recognition from pro-establishment critics. And his pen always gave them a befitting reply. That is why even almost two decades after his death, his poems still define the struggle.

It is an established fact that Naxalite writers had never written for the sake of fame. Most of them either lived the life of saints or of rebels and have written poetry from the battle fields. They never cared for honors. They wrote what they lived and lived what they wrote. Paash also never wrote for the sake of writing but it was his sensitivity and inner restlessness which motivated him to write. He never stroked his pen to become just a poet.

The poetry of the 20-year-old man challenged the establishment. And the impatient rulers implicated him in a fabricated murder case. He was imprisoned for two years. It was this time which played a key role in his ideological growth. He wrote his best poetry in jail on cigarette packs and smuggled it out.

After two years, Paash was acquitted and he became a celebrated poet of the revolutionary camp. His poems were translated and published in Hindi, Nepali, English and many other Indian languages.

In the early 1980s Sikh fundamentalists waged a war with demands for a separate country, Khalistan. Paash opposed the activities of the Khalistanis. While in the United States, to defeat the reactionary idea of Khalistan on ideological grounds, he started a newspaper named "Anti-47" (after the AK 47, the weapon Khalistanis used to kill).

History proves that the fundamentalist forces rarely indulge in ideological debates, they often suppress their critics with the gun. And the same fate befell Paash. He was gunned down by Khalistani militants on March 23, 1988 (ironically the martyrdom day of Shaheed Bhagat Singh, Rajguru and Sukhdev, the revered patriots who were hanged by the British during the struggle for India's independence). He was 37 years old.

They eliminated him physically at a very young age but his four anthologies of poetry "Loh Katha" (Iron-Tale, 1970), "Ud dian Bazan Magar"(Behind Flying Hawks, 1973), "Saadey Samiyaan Vich" (In Our Times, 1978) and "Khilre Hoey Varkey" (Unorganized Papers, publish posthumously in 1989) have become an integral part of the lives of people.

In the long list of revolutionary poets, Paash is another signature who "wrote what he lived and lived what he wrote." He chose his end consciously. But he was a warrior who never let his dreams die. That is why, September 9th his 56th birth day is being celeberated in Punjab by the peasants in fields, workers in mills and students in universities.
Posted by Unknown at 9/11/2006 09:58:00 AM