Prakash Jha blackmailed to include Anti-Maoist Propaganda in Chakravyuh

It is reliably learnt that the Indian Censor Board has refused to clear the film Chakravyuh for taking a pro-maoist stance and has threatened to block it's release unless the director Prakash Jha in-corporates the Government's Anti-Maoist Propaganda in the film.

Given the prevailing political turmoil in the country and growing disillusionment with parliamentary forms of democracy, the Home Ministry fears that a sympathetic portrayal of the CPI(Maoist) cadre and leaders in the film Chakravyuh could inspire thousands of urban and rural youth to join the armed insurrection.

With no option left, the director of the film Chakravyuh has started re-shooting several parts of the film. Let's hope he is able to resist the pressure from the censor board.


Chakravyuh shoot not yet over

Just about a month to go before the release of film - Chakravyuh, director Prakash Jha along with cast members Arjun Rampal and Esha Gupta are headed back to Bhopal. Sources say that Jha would be filming in Bhopal next week for some much needed 'patch work', just ahead of scheduled release on October 24.

Sources say that the 'patch work' is considered significant for Jha's new film which seeks to explore the Naxal problem. The film has already run into trouble with the censors over a song and its intentional resemblance to real-life characters and incidents.

Chakravyuh is scheduled for an international release on October 24. Only a few cast and crew are expected to return for filming next week, with the schedule limited to Bhopal. 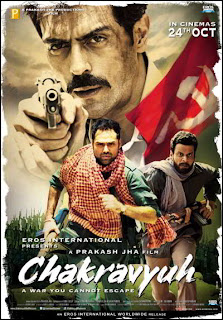