When the former prime minister of the country has himself
gone on record to say that
given today's circumstances and developments he would have
become a maoist and the only thing stopping him from joining
them is his failing health , I want to ask today's youth, one question

What is stopping you from joining the maoists ? 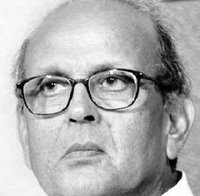 Braving relentless dialysis, frail but resolute, the Mandal Messiah VP Singh has taken on the might of the corporate-political nexus on behalf of displaced farmers in the Hindi heartland and across the country. By brazenly operating in favour of private companies and by openly bulldozing peaceful public dissent, social consensus and people’s aspirations, the establishment is pushing the people to a precipice of no-return. In such unjust circumstances, why shouldn’t the armed struggle of the Maoists spread in the deep hinterland? India is sitting on a volcano of social unrest and economic conflict, he says, which is bound to explode if the politics of liberalisation pushes the people into exile and condemnation

What makes you so upset about the Dadri Power Project? Don’t you think that UP desperately needs power?

We have trumpeted that we have introduced market economy but the first principle of market economy is that the buyer and seller should have the freedom to buy and sell. The choice has to be there whether one sells or not, buys or not, and the price is the price which is negotiated and settled. That is the market price. Now if you deny the buyer or seller the right to exercise his choice whether to buy or sell and instead of negotiating the price there is government intervention which settles the price, where is this market economy?

This is exactly what is happening in Dadri.

This is happening all over the country, not just in Dadri, sometimes in the name of hi-tech cities, sometimes in the name of Special Economic Zones (SEZs). All the states and all the chief ministers are doing it, and this includes other companies also and not just Reliance. If you are going to have an economy which is skewed in favour of the rich, then it is all a bogus market. Consider the build-up of a project.

Land is needed. So are machinery, concrete, cement and steel, among others. When it comes to the farmers’ land, everyone puts up a precise question: “Don’t you want development?” Why is this question not put to the Birlas and Tatas? By the same principle, Tata Steel and Birla Cement should also be acquired. Why doesn’t the UP government acquire electricity at the rate it wants to, instead of signing the deal with Reliance? Everybody dictates to the government the price it wants for its product, only the farmer is dictated by the government. This is injustice.

Prime agricultural land close to one lakh acre has been taken by the UP government and another one lakh acre by all the other states. Why can’t they set up these projects in the uncultivable lands? For example, take Annapara. It is uncultivable. Besides, when you take land in the villages of western UP, Haryana or Punjab, there are about 20 to 25% landless labourers dependent upon agricultural activities. When that activity ceases, where will they go?

The adjoining villages are already hard-pressed. If they come to the city, their homes are bulldozed. If you take the whole map of India, we are heading towards a major socio-political crisis. The way people are being displaced, who can stop the arrival of Maoism?

But why target only Dadri and not others?

That is the problem of VP Singh. You hang him. Just because VP is this you can’t hang the farmers and labourers. This is not the issue of an individual. I am raising the issue all over the country. As for Dadri, I am associated with it for more than one year. I discussed the matter with Mulayam Singh Yadav even before the Jan Morcha was revived. When farmers came to me I promised to stand by them. In my physical condition, it is the easiest place to go. In Haryana, a public meeting was held, which was addressed by Raj Babbar. I took up the issue in Pune also where Infosys has taken 3,500 acre in one village. Villagers protested and were fired upon. I went there and took a stand. I said, “Put my jhuggi here, I will go for dialysis to Bombay but will not budge from here.” Thankfully, Sharad Pawar and Vilasrao Deshmukh reconsidered the issue and cancelled the acquisition. How can you say we are not taking up the issue?

Did you raise it with the Prime Minister?

I wrote to the Prime Minister but got no response from him. I also spoke to Mulayam Singh Yadav about it. He said that he would address the matter after the block elections in the state. But six months have gone by and nothing has happened.

The basic allegation is that there was no competitive bidding for the Dadri project.
Yes, there was no competitive bidding. I have raised the issue with several people and no one has denied this. Even in defence deals there is bidding. Is this not corruption and favouritism? Straightaway, this is a case of corruption. You pick up a party and give the project without competitive bidding. Who are you to do that? Rs 2, as the price, has been announced. It is not only a farmers’ issue but also involves the consumers. Didn’t the Enron deal break on the supply tariff issue? This is a scandal bigger than Enron.

More so, 60% of the cost of acquisition that Reliance should have borne is being borne by the state government derived from people’s money. The Gram Samaj land has been given for a song at Rs 100 per acre per year. Why? We don’t know if there is any clause whereby a deadline for the project has been fixed. We were told two years. Two years have passed. Is there a penalty clause? If there is, has it been applied and if not why is it not there? The amount of land that has been acquired is much more than what is required. The electricity that will be generated will not be for UP alone. It will go to Haryana, Delhi, Punjab, Rajasthan. This tomtomming that it is only for UP is a farce.

There is a belief that the farmers agitating in Dadri are trying to extract a better price for their land which is far in excess of the agreed rate.
The farmers have been given the price of Rs 150 per square yard in Dadri. The same land without any development has been valued at Rs 5,700 per square yard by Reliance and it is demanding a loan from the bank on the basis of this assessment. My thesis is that the rate at which you have valued the land for the bank appraisal should be the real value of the land. If it is not, then you are cheating the bank. And if it is the real value, then you are cheating the farmers. One of them is being cheated.

How do you analyse the entire economic process undertaken by Mulayam Singh in collaboration with big industrial houses?
He has created an economic oligarchy. UP has been virtually handed over to this group of people. When he speaks about the Uttar Pradesh Development Council (UPDC), why are only industrialists its members? Why aren’t there farmers in it?

Mulayam Singh Yadav is quite perturbed. He says that you are doing this at the behest of the Congress.
Then he can get me hanged in a park or some corner of Lucknow for whatever I am doing. But is that an argument to deny the farmers the legitimate price of their land? He engages in personal allegations and then defends them, and the main issue is lost. I know his tactics. The issue is more important than VP Singh.

Special Economic Zones (SEZs) are sprouting all over the country. Those who promote them claim that they will create lakhs of jobs and there will be universal progress and development.
Why call it a market economy then? Stop it. A farmer as the owner of his land does not have the choice to decide the terms at which he will part with his property. Give me one advocate of liberalisation who can defend it? That is why this whole thing is a hoax. If you refuse to listen to the people who are affected today and if you send the police tomorrow, they will take to arms. And wherever they have taken up arms you have not been able to handle it.

There have been massive protests in Kalinga Nagar in Orissa against the acquisition of land. It has been almost one year and the roads are still blocked. They are ordinary people but are being branded as Maoists by the corporate sector and the government.
Yes. I want to become a Maoist if this is the model of development. But I can’t at this age.