Two days after suspected Maoists shot dead a JMM MP
in broad daylight.This judgment of the SC is being seen
by many as a vindication of the superiority of
Maoist Judicial System which operates through Jan Adalats.

What the supreme court is saying today is what Maoists
have been doing for decades.It's a well know fact that the
Maoists today run hundreds of Jan Adalat's (People's courts )
all over the country and that they are immensely
popular among the masses because they promise
speedy justice , cost nothing and are always fair.
The accused are always given time to defend themselves

At the end of the trial the sentence is awarded and carried out
And evidence convicting the person is usually distributed.

In large parts of the country people no longer visit
government courts for it is populated by leeches who
suck the blood out of the poor people.

All power to the Maoists !

We recommend that the government should approach
the Maoist leadership and take their advice and help
on how to clear the millions of cases pending in
front of the government.

New Delhi: Observing that everyone wants to loot India, the Supreme Court on Wednesday said the only way to rid the country of corrupt elements was to hang a few of them in full public view. 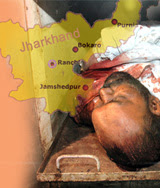 Criminal MP Sunil Mahto shot dead by Maoists in full
public view for his role in the murder of 11 maoist sympathisers.
"The only way to rid the country of corruption is to hang a few of you on the lamp post. The law does not permit us to do it but otherwise we would prefer to hang people like you to the lamp post," a Bench of Justices S B Sinha and Markandeya Katju was quoted by PTI as saying.

The Bench made the statement while hearing the bail application of Braj Bhushan Prasad, a dismissed employee of Bihar government for his alleged involvement in the Rs 1,000 crore fodder scam.

Courts of late has been hearing many cases that have generated widespread public interest and have evoked the public's outrage including the Jessica Lall murder case, the Nitish Katara case and the Priyadarshini Mattoo rape and murder case.

"Everywhere, we have corruption. Nothing is free from corruption. Everybody wants to loot this country. The only solution for this menace is to hang some people in the public so that it acts as a deterrent on others," Justice Katju was further quoted as saying.